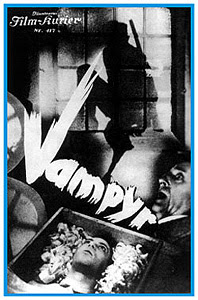 I’m going to go out on a limb and say that this is probably the first and only time that the names of Ed Wood, Jr. and Carl Theodor Dreyer have been mentioned in the same sentence. Most people know of Ed Wood by now – the creative mind behind some of the most uniquely incompetent movies to come out of Hollywood in the 1940’s and 50’s – e.g. “Plan Nine from Outer Space” and “Glen or Glenda”. (I like the phrase that filmmaker Larry Blamire uses to describe Wood’s oeuvre, “professionally challenged”.) Many people have called him one of the worst directors of all time.﻿


Carl Dreyer was a critically acclaimed Danish director working in Europe from the 1920’s through the 60’s. Dreyer’s 1928 silent film, “The Passion of Joan of Arc” is considered one of the outstanding achievements in cinema. Many people have called him one of the greatest directors of all time.

What in the name of all that is holy do these two men have in common? They both were unable to obtain financing for their projects and had to go outside the studio system to get their films made. They both secured funding through private backers but had to make casting compromises to do so. The results for both were quite different, however.

In the case of Ed Wood, the movie was the deliriously inept “Bride of the Monster”. The financier was a rancher named Donald McCoy who backed the film on condition his son, Tony, be the star. Tony McCoy’s wooden performance secured him a few small roles in movies and TV. “Bride of the Monster” stumbled to film obscurity until it was picked up by the writers at “Mystery Science Theater 3000” and became a classic episode of that insanely funny show.

Dreyer had an artistic triumph but a financial disaster with “The Passion of Joan of Arc”.

To fund his next project, “Vampyr”, he made the acquaintance of a minor Russian aristocrat living in Paris, the Baron Nicolas de Gunzburg. The Baron agreed to finance the film if he could play the leading role. De Gunzburg had never acted before, and never made another film. Under other circumstances the closest he should have come to a film set was an aisle seat at the local nickelodeon: his only qualifications for a starring role were his good looks and tailored wardrobe.  But in fact, he was not the only amateur hired. There were only two professional actors in the cast, the rest were selected on the basis of how their look fit the roles

De Gunzburg was well known for his intelligence, wit and impeccable style and moved among the creative avant-garde of his time. Eventually he came to the US and was hired as editor-in-chief of Town and Country and was for 20 years fashion editor at Vogue, counting Bill Blass, Oscar de la Renta and Calvin Klein among his protégés.

Independent cinema is not something that has occurred only in the last few years. The artistic dreams, passions, challenges, disappointments and successes involved are universal and have been around for a long, long time. Today, indie filmmakers use Facebook and indieGoGo to reach out to people and raise funds. No matter if the end product is a work of genius or ….something else, you have to admire the determination and guts of the individuals who will do anything they must to get that work made and in front of the public. This drive to create is remarkable and each filmmaker (or any artist in any medium for that matter) should be respected and supported. 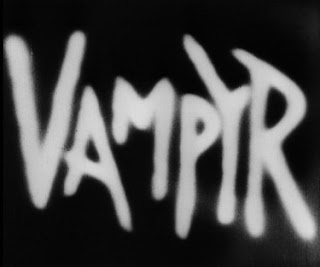 Let’s talk more specifically about “Vampyr, a work of genius. Film historian William K. Everson calls it – “one undisputed masterpiece of the genre”. However, I have to admit it took more than one viewing for me to appreciate it. You may have the same first impression of it that I had – slow, dull, and confusing. It has very little in the way of a typical linear plot. It is so disorienting as to time and location it’s impossible to be sure if what we are seeing is real or a dream, or a combination of the two. Dreyer shows us things that are inexplicable, sometimes impossible, and asks us to accept them. He moves the camera in surprising and unprecedented ways, twisting our expectations by playing with our point of view. All of this adds up to a challenge for the audience. Is this challenge worth it? Yes, definitely. I have never experienced a more unsettling film, one that left me with a sweaty unease – a bit like a fever dream. It is absolutely one of the strangest horror films ever made and becomes more interesting with each viewing.

The first thing you notice is the disjointed sound of the film.  Dreyer was not comfortable with sound recording and so shot “Vampyr” completely on location in France without a soundtrack. He synched the music, sounds and dubbed voices later. There is very little dialog and it feels very much like a silent movie. Exposition is given to us first via narrative cards we read on the screen and later by seeing the pages of a book the characters are reading. 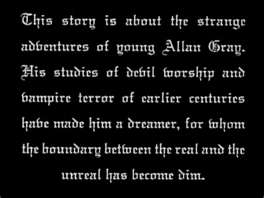 It was typical at the time to make more than one version of a film for international audiences. Dreyer shot multiple takes in English, German and in French and he chose actors who were able to speak the lines in three languages, or at the very least able to move their lips to make it look as if they were speaking the language. When even that was not possible, Dreyer positioned the actors so you did not see their mouths when you heard the dialog. Fortunately, de Gunzburg was fluent in all three languages so it was always his voice you would hear dubbed into the film for his character.

(The complete English version has been lost and the restored version from Criterion has been created using the German and French versions.)
We meet our hero, Allan Gray as he approaches a country inn to find a room for the night. We are told through the narrative that Gray is a wanderer and a dreamer; one who has studied the occult and is obsessed with vampires and all things supernatural. He is shown to a room by a young girl and wished a good night. Gray glances out the window and sees a farmer carrying a large scythe. The man is at the river’s edge, waiting to cross on the ferry (the ferry across the river Styx to the underworld?). The farmer stands very still holding the scythe, resembling the figure of Death seen so often carrying the same implement. Next, Gray’s attention is drawn to a framed print on the wall. It shows a sickroom, the patient in bed with priest and family around him, as well as a skeletal figure of Death hovering over him. 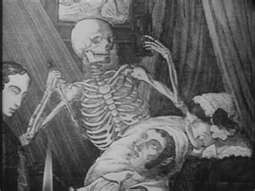 These are just two of the small impressions we are shown which help us appreciate Gray’s state of mind and hint at the adventure awaiting him. But up to now we are on pretty firm ground, realistically speaking. 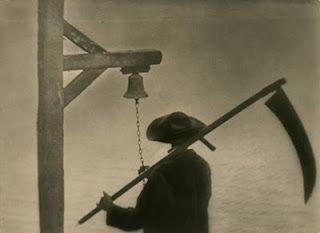